Fish skin gelatin is a partially hydrolyzed protein made from traditional mammalian animal products and by-products of meat processing. Because of its unique functional properties and reasonable price, it is widely used in the food and medical industries. fish gelatin derived from fish processing scraps has become a new alternative material for gelatin.

The article introduces the preparation method, flavor and freezing power, viscosity, emulsification, foaming and film-forming properties of fish gelatin. In addition, the purpose of summarizing its application in food, medicine and other industries is to provide a certain theoretical basis for the further development and utilization of fish gelatin. 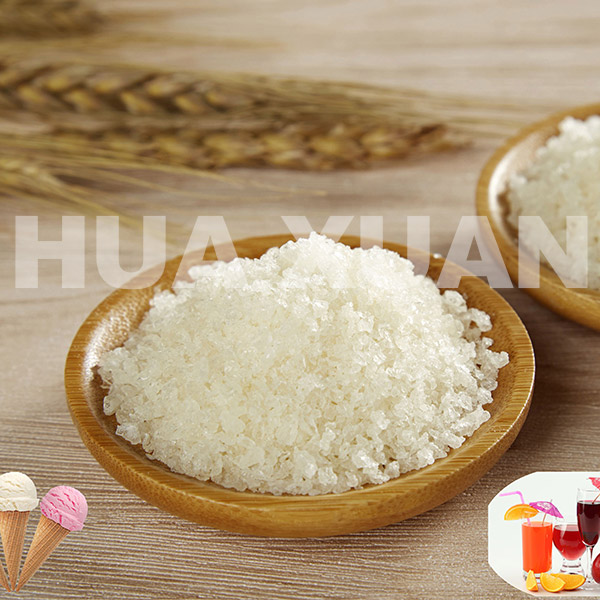 The basic characteristics of fish gelatin

Gel strength and viscosity are important indicators to measure the quality of gelatin, and its flavor directly affects the development and application of gelatin.

The functional properties of fish gelatin

The functional properties of fish gelatin such as emulsification, foaming and film-forming properties are closely related to its application.

Most gelatin solutions have no emulsifying properties. Only the skin gelatin prepared by the alkaline method exhibits a certain emulsifying ability when the concentration C>0.6%, while the fish skin gelatin can be used to make emulsifiers. Studies have found that even when the temperature, salt concentration, and pH value change, the fish gelatin emulsion can still maintain a certain degree of stability. That is, under normal circumstances, fish gelatin is relatively stable during the emulsification process.

In addition, fish gelatin can reduce the surface tension of the gas and liquid phases by increasing the phase viscosity of the solution to show a certain degree of foaming. This is mainly because the hydrophobic part of fish gelatin is adsorbed on the gas-liquid interface, and its area increases with the spreading and exposure of the protein, thereby promoting the formation and stability of the foam. Therefore, because fish gelatin contains high hydrophobic amino acid residues and viscosity, the use of it to prepare gelatin foaming agents has a good application prospect.

Studies have reported that fish skin gelatin extracted with hot water has good film-forming properties. In addition, high-purity fish gelatin can be mixed with animal gelatin, and this mixture has better film-forming properties. However, the current research on fish gelatin protein membranes mainly focuses on large seawater fish such as seabass, tuna, walleye, and cod.

In recent years, some scholars have tried to prepare gelatin protein membranes from the skins of large freshwater fish such as channel catfish, and found that the mechanical properties of the protein membranes are not only superior to those of marine fish skin gelatin membranes, but even close to those of terrestrial mammals. .

The preparation method of fish gelatin

Fish gelatin is generally prepared by chemical or enzymatic methods.

Chemical method is the traditional preparation method of gelatin. It destroys the covalent and non-covalent bonds between the molecules of collagen fibers and the molecules through the action of acid or alkali, and releases the collagen molecules. Then the hydrogen bonds are broken by heating to prepare a gelatin solution, and then the gelatin solution is separated. Gelatin can be obtained by purification. At present, the acid method, alkali method, acid-base method, salt-alkali method and other chemical preparation methods are commonly used to prepare gelatin.

The grass carp skin was pretreated with hydrochloric acid with a concentration of 1.19% (v/V) for 24 hours, and the gelatin yield was 19.83%. The tilapia fish skin was processed with different concentrations and types of acids, and the fish skin gelatin was extracted. When optimizing the extraction process of Ankang fish skin gelatin, it was found that the best extraction process of gelatin is to use Ca(OH) with a mass fraction of 0.2%, extraction at 10°C, and liming for 7 days. The extraction rate was 11.23%.

After the dried tilapia skin was decolorized and swollen, the gelatin was prepared by boiling the gelatin in hot water. The results showed that the best extraction process is to soak in a 2.0% sodium hydroxide solution for 24 hours at a concentration of 0.3. Soaked in% hydrochloric acid solution for 4h, the boiling temperature is 80℃, and the boiling time is 8h. Under these conditions, the extraction rate of gelatin is 47.54%.

Enzymatic gel preparation is mainly a method of pretreating collagen with protease (pepsin, trypsin, papain, etc.) to partially degrade the collagen and then heat denature it to prepare gelatin. Although the main body of the collagen molecule remains intact under the protection of the triple-helical configuration, the non-helical peptide region, that is, the terminal peptide, is partially degraded by the protease, which reduces intra- and intermolecular cross-links and promotes the dissolution of collagen. Protease was used to study the extraction technology of snapper skin gelatin. The antibacterial properties of gelatin prepared by enzymatic hydrolysis of catfish bones were studied.

The background of fish gelatin

In recent years, the total global fish production has increased year by year, and of the fish products consumed by humans, 65%-75% are consumed as direct consumer goods, while the other about 24% products have become leftovers of food processing. These leftovers are either made into feed and fertilizer for sale at low prices, or are discharged randomly. This phenomenon not only causes waste of resources but also pollutes the environment. According to reports, fish skin is rich in protein, and more than 80% is collagen, and fish scales and bones are also rich in collagen. According to statistics, China’s total fish production has exceeded 30 million tons, of which fish skin accounts for 6%, which is about 1.8 million tons. The extraction rate of fish skin collagen is generally 6% to 8%. That is, China alone can extract more than 114,000 tons of collagen from fish skin every year. According to the statistics of the Pharmaceutical Economic News website, in 2012, the total consumption of the international gelatin market will reach 359 thousand tons. However, in recent years, due to diseases and religions, the collagen extracted from pig skin, pig bone, cowhide and cow bone as the main raw material has been restricted, and it has been unable to meet the increasing demand of people. Because of factors such as safety, economy, religion and environment, fish gelatin has attracted more and more attention.

Gelatin, a common biopolymer, is the skin, bone, scale and other tissues rich in collagen of animals (such as cows, pigs, chickens, fish, etc.). After pretreatment and transformation, it is extracted at an appropriate temperature. Then process the resulting high molecular polypeptide polymer. There are generally more than 20 kinds of amino acids that make up gelatin, of which glycine accounts for 1/3, proline or hydroxyproline accounts for 2/9, alanine accounts for 1/9, and various other amino acids. Gelatin is connected by peptide bonds and is non-toxic and biodegradable. Its quality is generally determined by its freezing power and viscosity. The higher the freezing power and viscosity, the better the quality.

After research, it has been found that fish skin, fish bones, fish scales, fish swim bladder, etc. contain collagen similar to mammals, and fish gelatin can be extracted.

Application of fish gelatin in the food industry

Fish gelatin has good application prospects in food processing. It can be used as food plasticizer, gelling agent, stabilizer, emulsifier, thickener, foaming agent, binder, binder, clarifier, etc. By comparing the sensitivity of porcine gelatin and fish gelatin to prepare hydrogels, it is found that foods made of fish scale gelatin have a lower melting point, and the melting rate and flavor release ability in the mouth are very ideal. Internationally, fish gelatin is recognized as the most advanced gel clarifier.

In the production process of beer and wine, fish gelatin is used as a sedimentation clarifying agent with good effect and the quality of the products obtained is very stable. Fish gelatin plays a role in thickening, emulsifying, stabilizing and clarifying in the wine brewing process.
In addition, fish gelatin contains relatively low calories, its gel melting temperature is lower than that of the oral cavity, and its taste is similar to fat, so it can be used to make low-fat foods.

The application of fish gelatin in the pharmaceutical industry

Fish gelatin collagen has weak antigenicity and biodegradability, and it has a coagulation effect on platelets, so it can be used to make heart valves, wound and burn repair materials, hemostatic agents, artificial skin, immobilized enzymes and extraction capsules. In addition, the mixed fish scale gelatin and other gelatins can also be used to make capsules, such as cod liver oil capsules and vitamin capsules. For drugs that need to appear in the intestines, enteric-coated capsules can be made.

Application of fish gelatin in photographic and electronic industries

Clarified fish gelatin was previously used as a water-soluble photoresist base. Some key components of color TVs, such as picture tubes, multi-hole masks, etc., are probably made using the photosensitive Rees printing process and matched with fish gelatin. Fish gelatin is also used in the lead frame that fixes the silicon chip in computers and micro-processing devices.

Application of fish gelatin in the cosmetics industry

After special processing, fish gelatin not only maintains its inherent excellent physical and chemical properties, but also improves its solubility in water due to the decrease in molecular weight, making it easier to be absorbed by the human body. Fish collagen can delay and reduce the generation of skin wrinkles, is beneficial to skin growth, can repair and nourish the skin, and can enhance the water retention capacity of skin cells. The cosmetic derivatives described in the patent are N-quaternary ammonium salt of fish collagen hydrolysate, N-acyl derivative or N. Silyl derivatives, the addition of these derivatives can play a very good lubricating and protective effect on the skin.

In summary, scientists have conducted detailed studies on the structure, preparation methods, sensory properties, functional properties and applications of fish gelatin. Although there are still certain limitations in the technology and application of extracting fish gelatin, it is undeniable that we have seen the huge value and potential contained in them. As people continue to pay attention to the biomaterials market, it is believed that the functions and application fields of these gelatins will be enriched and improved to a greater degree in the future. 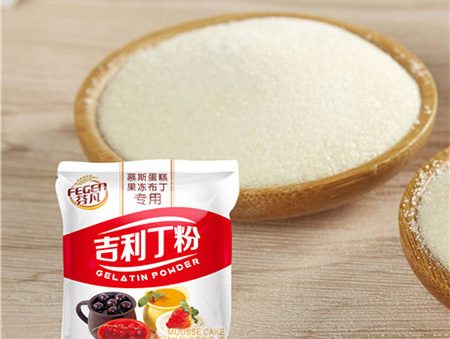 There are many types of gelatin. beef gelatin, gelatin powder & leaf gelatin.

Our wholesale gelatin is slightly yellow to yellow, transparent or translucent microstrip luster flakes or powder 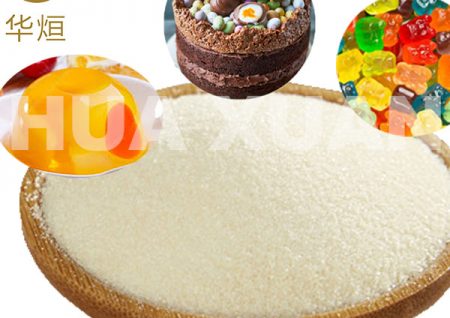 In the food industry, edible gelatin is used as an additive in confectionery. Gelatin candy. 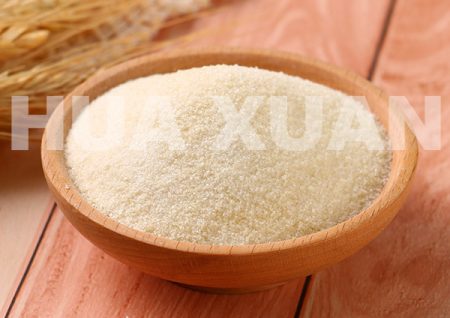